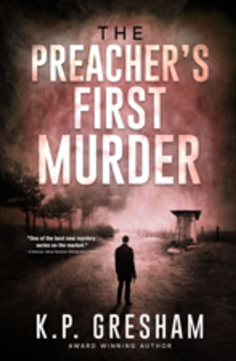 Plot: Gresham’s novel offers dynamic plot development with a strong conceptual  foundation: a string of mysterious murders take place in a seemingly-innocuous Southern town, where people pretend to love each other but secretly bottle up hate, rage, and secrets.
Prose: Gresham’s prose is free-flowing and clean of technical errors. The dialogue authentically reflects the story’s small-town, southern vibe, and the author infuses an otherwise somber story with humor.
Originality: Gresham’s novel enhances a classic murder mystery, with dimension and character complexity. A protagonist struggles to maintain his new identity as a pastor, falters, and ultimately reveals his strengths and desires as a former undercover police officer and modern man.
Character Development: The story's cast introduces several mysteriously-linked characters, any of whom could have had intent and motive to commit the murders at hand. As outsiders, both Pastor Matt Hayden and Angie O’Day convincingly gravitate towards each other, despite the consequences to both of their well-known reputations.

The Preacher's First Murder is the first book in the Pastor Matt Hayden series, and is the alter ego of a policeman forced to enter the Witness Protection Program to revise his identity and save his family. In his newfound identity as a Texas pastor newly out of seminary school, Matt anticipates a semi-retired pastoral life. The goal is to stay out of trouble; but he seems destined for the fast track as the small town he relocates to faces a murder and a controlling daughter's grip.

Forced to blend the dual personas of a quiet pastor and the investigative prowess of his alter ego, Matt receives heart-wrenching lessons in crime, small-town politics and personalities ("Elsbeth wanted her son to use the service as a campaign stop."), and theological challenges ("Every one of those sermons had followed the gospel for the day to the letter. Every one of them would have made his seminary instructors proud. They’d been theologically truthful. Scripturally sound. And, very possibly, blatantly boring.").
Because The Preacher's First Murder is firmly rooted in Matt's new identity, it offers an intriguing contrast between his investigative skills and his theological dilemmas, which at times clash in the arena of bigger picture thinking and small town interactions.

From violent threats during bar brawls where the residents handle their own problems without police intervention to changing times, duties, and approaches in Wilks, generational ties and history come to light as Matt toes a delicate line between a pastor's spiritual world and a policeman's gritty scuffle with death and murder.

This dichotomy challenges perceptions of home, safety, good and bad memories, and present-day issues often cleverly defied by those not quite in socially accepted circles: "She could stand living in a town where people thought she was something she wasn’t. She’d done that all of her life and snubbed her nose at them all. Heck, she’d even named her bowling team “The Hellraisers” so that the Lutheran Church would be forced to put a bad word in their bulletin every time the church team played hers...She couldn’t stand living in a town where someone had hated enough to kill her mamma. She wasn’t sure she could live with that fact without becoming an animal herself."
As Matt's probe of close-held small-town secrets endangers his newfound persona and his perception of his revised role in life, events circle around not just his choices but upon individuals challenged by not just the murder, but the town's evolving new identity. A possibility of romance imparts an additional spicy flavor to the plot.

Readers seeking a murder mystery that works on many levels, from investigative skills to different levels of interrogation and suspicion, will relish Matt's special dilemmas as he faces an overwhelming weight of responsibility as events unfold to reveal a deadly twist.

Does the truth really set you free, or does it introduce more complications? Murder mystery fans who look for more than a simple 'whodunnit' plot will find The Preacher's First Murder takes a convoluted, satisfyingly complex path as it follows Matt's conundrums, possibilities, choices, and the difficult task of settling into not just a new town, but a new identity challenged by past and present events and future promises.